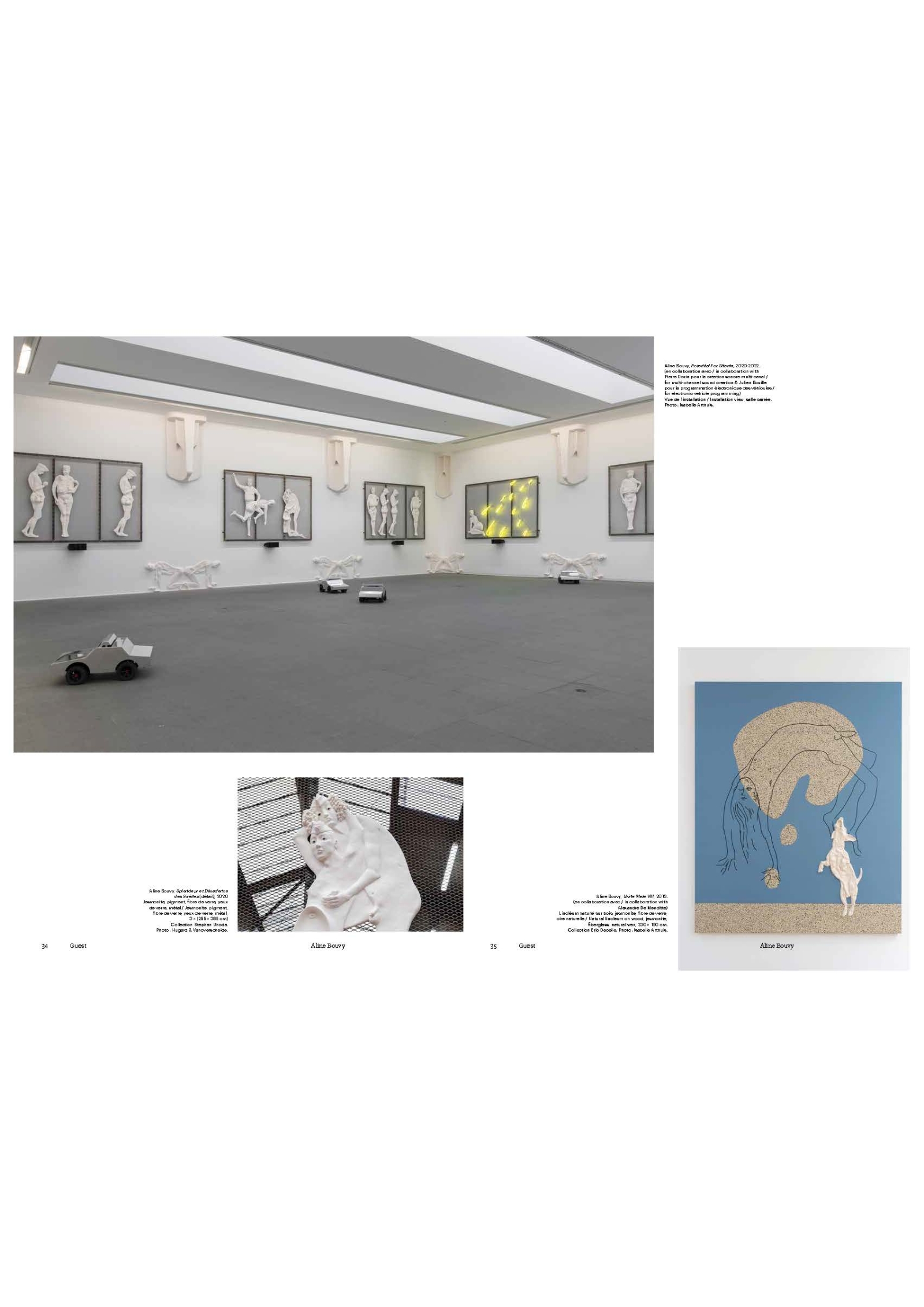 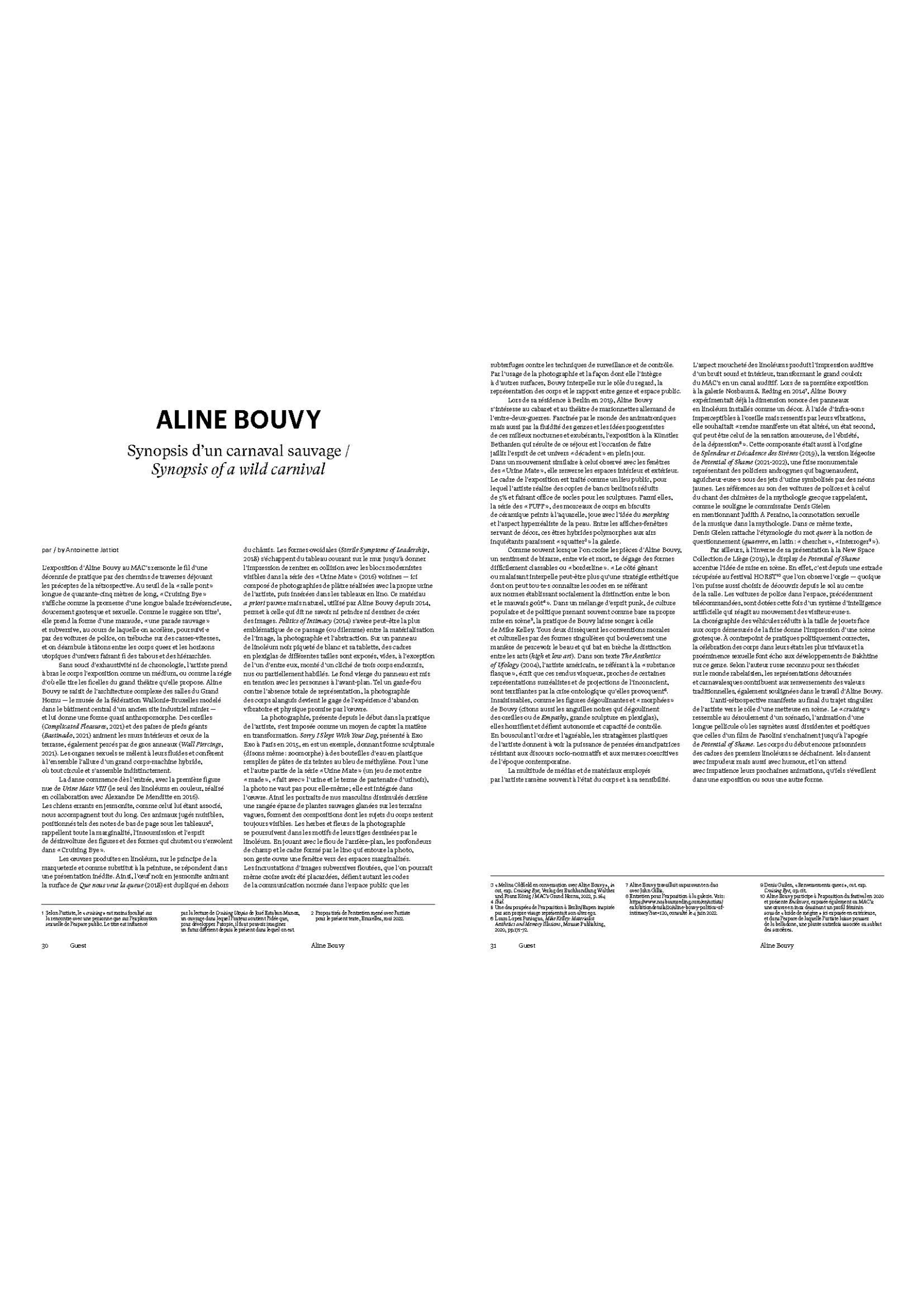 The Aline Bouvy exhibition at MAC’s retraces the path of a decade of work via diagonal footpaths which evade the precepts of the retrospective. At the entrance of the “bridge space”, which is 45 metres long, “Cruising Bye” announces the promise of a long, irreverent stroll, lightly grotesque and sexual. As the title suggests, the exhibition is presented in the form of a cruise, a subversively “wild parade” during which we pick up speed, as we are tailed by police cars, trip over speed bumps, tiptoe amongst queer bodies and utopian horizons which disdain taboos and hierarchies.

Unconcerned with exhaustiveness or chronology, the artist addresses the exhibition as medium, or as the backstage from which she pulls the strings of the grand theatre she presents for us. Aline Bouvy takes hold of the complex architecture of the exhibition spaces in the Grand Hornu—a museum in the Wallonie-Brussels federation which has been carved out of the central building of an old industrial mining site—and gives it a nearly-anthropomorphic shape. There are ears (Complicated Pleasures, 2021) and pairs of giant feet (Bastinado, 2021) animating the interior and terrace walls, which are also pierced by large rings (Wall Piercings, 2021). The sexual organs are indistinguishable and meld with their fluids, conferring the ensemble with an allure of a hybrid man-machine, where everything circulates and fits together indistinctly.

The dance begins from the moment the visitor enters the exhibition, with the first nude figure Urine Mate VIII (the only colour linoleum, made in collaboration with Alexandre De Menditte in 2016). Wandering terrazzo dogs, like the one we see here, accompany us throughout the entire exhibition. These animals, pest-like, positioned as footnotes underneath the pictures, are a reminder of marginality, the untamable, offhand spirit of the figures and forms that fall or fly away in “Cruising Bye”.

The linoleum works, fabricated through a process resembling marquetry, serve as a replacement for painting, dialoguing with one another in an unprecedented way. For instance, the black terrazzo egg which can be seen on the surface of Que nous veut la queue(What the Tail Wants From Us, 2018) is duplicated outside of the frame. The oval shapes (Sterile Symptoms of Leadership, 2018) escape from the painting, running along the wall until we get the impression that they have crashed out into the modernist blocks seen in the nearby series “Urine Mate” (2016)—here they are made of photographs of plaster molds made from the artist’s urine, that are then inserted into the linoleum pieces. This non-noble, yet natural material, has been used by the artist since 2014, allowing her to create images, despite—as she has stated—not knowing how to paint or draw. Politics of Intimacy(2014) is perhaps the most emblematic work of this passage (or dilemma), between the materialisation of the image, photography and abstraction. Displayed atop a white-flecked black linoleum panel with shelf are a number of plexiglass frames of varying sizes, empty, save for one, containing an image of three nude, or partially-dressed sleeping figures. The blank background of the panel contrasts with the people in the foreground. Like a safeguard against the total absence of representation3, the photograph of bodies at rest functions as a gauge of the experience of the vibratory and physical abandon the work promises.

Photography has been present in the work of the artist from the very beginning, and has become a way to capture matter in the process of transformation. Sorry I Slept With Your Dog,shown at Exo Exo in Paris in 2015, is one example, giving sculptural form (we may go so far as to say: zoomorphic) to plastic water bottles filled with rice pasta dyed methylene blue. In both parts of the series “Urine Mate” (a play on words which references both “made” with urine and the term for a partner at the urinal), a photograph is not an isolated object; it forms a part of the work. The male nude portraits, hidden behind a thick row of wild plants harvested from vacant lots, form compositions in which the subjects’ bodies remain visible. The grass and flowers from the photograph are echoed in the plant motifs sketched out on the linoleum. By playing on the blurriness of the background, depth of field and the linoleum frame surrounding the photograph, a window is opened onto marginal spaces. The superposition of blurry, subversive images which resemble posters which have been plastered, defy the codes of communicational norms observed in public spaces as well as the subterfuges against surveillance and control techniques. Through the use of photography; by integrating it into all sorts of surfaces, Bouvy calls attention to the role of the gaze, the way bodies are represented and the relationship between gender and public space.

During a residency in Berlin in 2019, Aline Bouvy became interested in German cabaret and puppet shows dating from the period between the two world wars. A fascination with the world of animatronics, gender fluidity and progressive ideas from these exuberant nocturnal realms resulted in an exhibition at the Künstler Bethanien which was the occasion to let the spirit of this “decadent” universe spring forth into the light of day. With a gesture that is similar to that of the “Urine Mates” windows, interior and exterior spaces are inversed. The exhibition itself was treated as a public space, for which the artist made replicas of Berlin public park benches at a 5% reduced scale, serving as plinths for the sculptures. Among them was the “PUPP” series, body parts sculpted in ceramic bisque and painted with watercolour, which played with the idea of morphing and the hyperrealistic effects of skin. With the window-posters as background, these hybrid, polymorphic beings seemed eerily to stand guard in the gallery.

As is often the case with the work of Aline Bouvy, a strange feeling, something between life and death, emanates from these hard-to-classify, or “borderline” forms. “The unsettling, or unhealthy may be more than just an aesthetic strategy whose norms we are all familiar with and which establish societal differences between good and bad taste”2. In a mixture of punk posturing, popular culture, and politics whose point of departure is its own representation, Bouvy’s work brings to mind that of Mike Kelley. Both artists dissect moral and cultural conventions through singular forms that upset the concept of beauty, dissolving frontiers between the arts (high and low). In his text The Aesthetics of Ufology (2004), the American artist refers to “flaccid substance,” which lends a viscous aspect, not unlike certain surrealist renderings and messages from the unconscious; terrifying because of the ontological crisis they provoke4. They are hard to grasp, like Bouvy’s “morphed” and dripping figures (we should also mention the black eels that drip from ears and Empathy, the large plexiglass sculpture), they are horrifying and threaten our autonomy and capacity to control. By upsetting order and pleasantness, the formal stratagems the artist uses give rise to the power of emancipatory thought which resist socio-normative discourses and coercive measures of contemporary times.

The multitude of medias and materials used by the artist is often reminiscent of the body and its sensitivity. The patchiness of the linoleums produces an impression of the auditory phenomenon of white noise, originating from the inside, transforming the large corridor of the MAC’s into an ear canal. At her first exhibition at the Nosbaum & Reding gallery in 20145, Aline Bouvy was already beginning to work with sound and the auditory possibilities of the linoleum which provided a backdrop for the exhibition. Through the use of infrasonic waves which are inaudible to the ear but can be perceived through the vibrations they cause, the artist attempted to “solicit an altered, or secondary state, such as the feeling of being in love, of drunkenness, of depression”6. Sound and music were also at the origin of Spendeur et Décadence des Sirènes(Splendor and Decadence of Sirens, 2019), the Liège version of Potential of Shame (2021-2022), a monumental frieze which depicts androgynous police officers teasingly loafing under jets of urine symbolised by yellow neon lights. The references to the sound of police cars and to the song of the Greek mythological chimera are a reminder of the sexual connotation of music in mythology, as curator Denis Gielen points out in a reference to Judith A. Peraino. In the same text, Gielen attaches the etymology of the word queer to the notion of questioning (quaerer, in latin: “to search”, “interrogate”)7. In addition, and contrary to the New Space Collection in Liège (2019) show, the display of Potential of Shame accentuates the idea of the mise en scène. Indeed, it is from a platform which was picked up from the HORST festival8 that we witness the orgy, although it can also be seen from the floor in the centre of the space. The police cars in the space, which in the past have been radio-controlled, have now been programmed with an artificial intelligence that reacts to the movements of visitors of the exhibition. The choreography of the small, toy-like vehicles, when compared with the outsized bodies of the frieze give the impression of a grotesque scene. A counterpoint to politically-correct behaviour, this celebration of bodies in a trivial state and the prominence given to sexuality resonate with Bakhtine’s work on this genre. According the Russian author known for his theories on the world of Rabelais, carnavalesque depictions contribute to the subversion of traditional values, also highlighted in the work of Aline Bouvy.

For the artist, the anti-retrospective is clearly a means to explore a singular path towards something more like a directorial role. Here, “cruising” resembles the unfolding of a screenplay, like the animation of a long film roll where dissident and poetic playlets close in spirit to a Pasolini film play themselves out, leading to the apogee of Potential of Shame. The bodies which are imprisoned in the linoleum at the beginning of the exhibition break themselves free. They dance shamelessly but also with humour, as we wait impatiently for their next appearance, whether that be in an exhibition or elsewhere.

1. From an interview with the artist conducted for this article, Brussels, May 2022.

3. One of the mannequins from the Berlin/Eupen exhibition who took the artist’s face as inspiration was her alter ego.

5.Aline Bouvy has collaborated in the past with John Gillis.

6. From an interview with the artist on the occasion of the exhibition : https://www.nosbaumreding.com/en/artists/exhibitiondetails/20/aline-bouvy-politics-of-intimacy?iae=120, accessed 4 June, 2022.

8. Aline Bouvy participated in the festival in 2020, presenting Enclosure, also shown at MAC’s: a stainless steel sculpture of a woman in profile wearing a type of muzzle, or bride de mégère shown outdoors here, adjacent to which the artist also grows belladonna, a plant which was often associated with the witch’s sabbath.