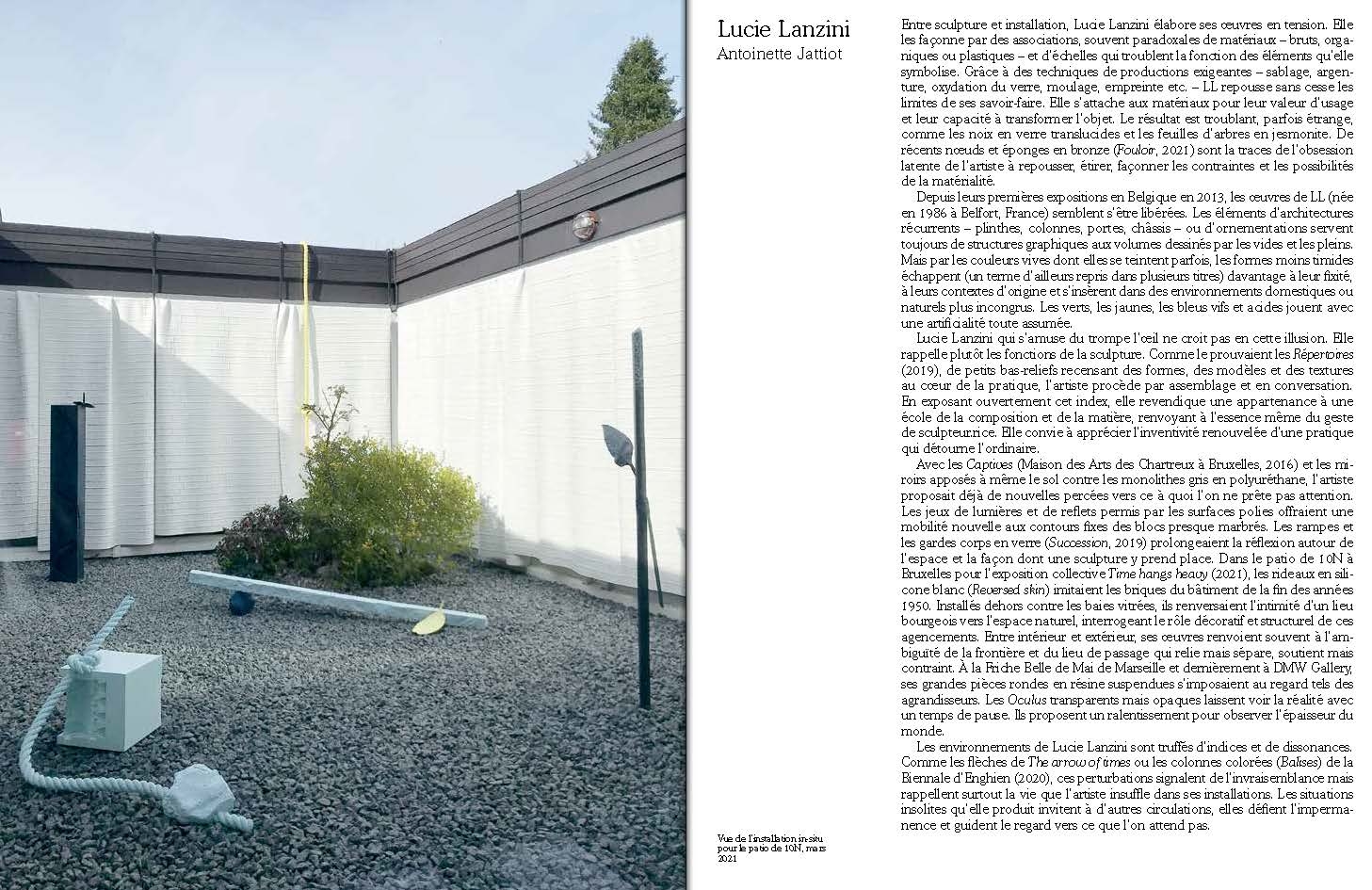 Lucie Lanzini elaborates her works, that exist between sculpture and installation, by means of tension. She creates them by juxtaposing materials that are often paradoxical — raw, organic, or moulded — at scales that disrupt the original function of the elements she symbolizes. Thanks to demanding production techniques, including sandblasting, silverplating, oxidation of glass, moulding, imprinting, etc. — Lucie Lanzini is forever pushing at the limits of her material knowledge. She is drawn to materials for their functional value and their capacity to transform the object. The result is troubling, at times strange, like the walnuts in translucent glass and the leaves of trees in jesmonite. The recent knots and sponges in bronze (Fouloir, 2021) are traces of the artist’s latent obsession to push back, extend and fashion the constraints and possibilities of materiality.

Since their ﬁrst showing in Belgium in 2013, the works by Lucie Lanzini (born in 1986 in Belfort, France) seem to have liberated themselves. The architectural elements — plinths, columns, doors, window frames — or ornaments still serve the graphic structures with the volumes deﬁned by voids and volumes. But through the bright colours with which she sometimes stains them, the less timid shapes further escape (a term evoked by several of her titles) their fixity and their contexts of origin; they insert themselves into less congruous domestic or natural environments.  The greens, yellows, bright blues, and acidic colours pronounce a fully aware artiﬁciality.

Lucie Lanzini, who enjoys trompe l’œil, does not believe in this illusion. Instead, she tends to recall the function of sculpture. As proven by Répertoires (2019), the small bas-reliefs reprising shapes, models, and textures at the heart of her practice, the artist proceeds by assemblage and through conversation. By openly exposing this index, she vindicates an adherence to a compositional and of mate-rial-oriented approach, which evokes the very essence of the sculptor’s gesture. She invites us to appreciate the renewed inventiveness of a practice that subverts the ordinary.

With Captives (Maison des Arts des Chartreux in Brussels, 2016) and the mirrors placed on the ﬂoor against the grey polyurethane monoliths, the artist was already proposing new inroads towards that which we tend to overlook. The play of light and reﬂection that the polished surfaces create offered a new mobility to the ﬁxed contours of the almost marbled blocks. The ramps and glass guardrails (Succession, 2019) multiplied the reﬂections around the space and emphasised how a sculpture can occupy a space. In the patio of the 10N in Brussels for the group show Time hangs heavy (2021), the white silicone curtains (Reversed skin) imitate the building’s late 1950s brickwork. Installed outside, against the bay win-dows, they reversed the intimacy of a bourgeois space into the external, natural environment, interrogating the decorative and structural role of these accoutre-ments. Between interior and exterior, her works often hark back to the ambiguity of the border, and of the place of passage that both separates and conjoins and supports yet constrains.  At the Friche Belle de Mai de Marseille and recently at DMW Gallery, her large round, hanging pieces in resin imposed themselves on the gaze like tools of magniﬁcation. These transparent yet opaque Oculus allow for reality to be seen with some delay. They propose we slow down to observe the thickness of the world.

Lucie Lanzini’s environments are rife with clues and dissonance. Just as the arrows in The arrow of times or the coloured columns (Balises) of the Biennale d’Enghien (2020), these disturbances signal improbability, but most of all they  recall the life the artist instils into her installations. The unusual situations she creates invite alternative routes of circulation, defying impermanence and  guiding the gaze towards the unexpected.